Man, New Jersey. I say it again, keep your eyes open and do not sleep on the Garden State. It wasn’t long ago I was writing about TwonDon, Englewood resident who released his EP Cheers 2 Us All back in November. It was a celebration of his recent success and an assertion that the work wasn’t going to stop. It’s almost as if he foreshadowed what was to come, as the end of January saw him blazing the stage at the legendary SOB’s prior to fast-rising sensation Benny The Butcher‘s set.

His new EP, Sorry 2 Bother U, is him politely checking in with us yet again. Now, successfully running his own company and racking up on merch, he’s looking to build an empire in ways that aren’t just rap and basketball – which black men have long been considered unable to do. The message is carried through in the cover art, featuring a young Twon writing rhymes with a basketball at his feet seated next to the current day 25-year-old with the Upperclass Entertainment logo behind him. Of course, the champagne at his feet because it’s still cheering time. 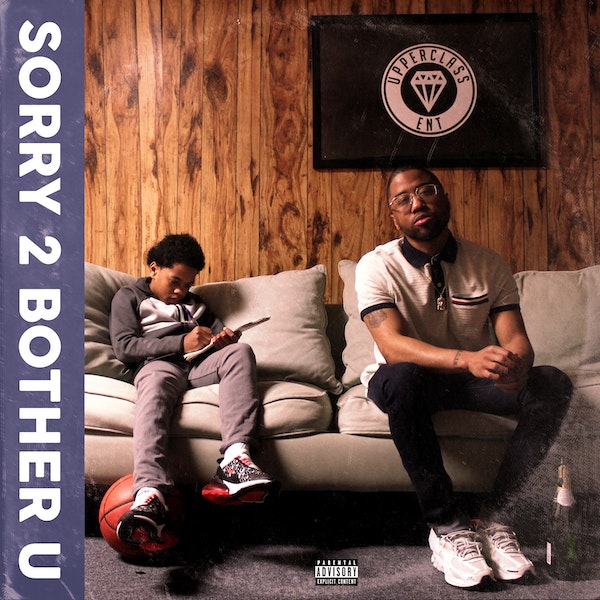 The album sits at 20 minutes over the course of seven songs. Though concise, the substance is very prevalent. Perhaps this was by design or timing is beautiful, but he pays homage to the women who have come into his life throughout the entire project which not only dropped on his birthday but International Women’s Day. Specifically, “My Last Love Song” where he addresses how he has grown as a result of these women, a recurring theme generally in his music when it comes to people he cares for. It’s a humble gesture that feels very authentic, especially in paying homage to a friend who passed away.

Album closer “Tired” features moody production and a very open Twon, addressing everything he’s had enough of. Shaky loyalty, inconsistent women, and the fact he feels he can only really get his thoughts out in a productive way through the music. Chasing the throne in music is tough, and added pressures only make the path rockier. He’s very aware of this and is questioning where the realness is beyond himself.

“In The City” is all about his mindset encompassing more than the near three miles of Englewood. He’s been around the U.S. and outside of it already, and having seen what else the world has to offer he’s ready to stay on the move. Of course, it’s still a grind and it’s not easy. Long, hard nights cause him pain but he’s committed to pushing through it. He just wants to make sure that the people there with him, are really with him.

“Health Issues” addresses alcoholism but also the impact poor decisions made in love can have on individuals. The background vocals create a somber aura, and the Upperclass Ent rapper definitely sounds a bit dejected. He’s supportive and honest, but the concern is clear. The hardest thing is seeing someone you love ruin themselves and feeling as if you can’t change anything.

The production of this album is stellar. It’s evident he has an appreciation for older sounds, but can certainly keep up with the trends of today. Producers such as IVN, D’Artizt, Kid Jimi and Alil Tafari all delivered elaborate, instrumental sounds with pockets fit for Twon to engage in a full-on bar-fest. His emphasis on enunciation and vocal clarity truly assist in pushing his narratives and maintain a connection to the content.

It’s been a long road for the rapper who used to roam the halls of Dwight Morrow High School back in 2010 handing out physical mixtapes to anyone willing to listen. As the game has changed, he’s adapted his style but maintained his core and expanded on a national scale. Perhaps he’s not a bother at all, huh?

Check out Sorry 2 Bother U by TwonDon and shoutout to all of the women out there.